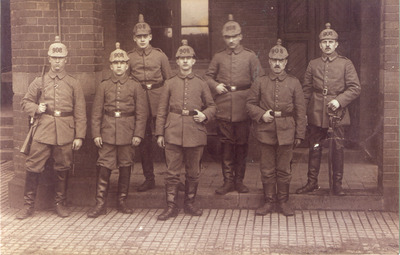 Museums across the UK have launched projects to mark the centenary of WW1. We look at 5 examples of museums using online platforms to connect with their audience and deliver the digital museum experience around the Great War anniversary.

1: The Imperial War Museum: Lives of the First World War

We looked at this project in an earlier blog post, and it’s still one of the most impressive uses of digital research and sharing out there. Users are invited to add to the growing archive of information on servicemen and women who served overseas during the conflict. It’s a great mix of official archive material and human stories, with an emphasis on user-generated content

14-18 Now is a partnership of museums, arts and other cultural organisations commemorating the war centenary across the UK. Letter to an Unknown Soldier invites the public to write a letter to the unknown soldier whose statue stands reading a letter in Paddington Station, or read the letters others have submitted. It’s a great way of exploring current attitudes to the conflict, tied in with the history of the unknown soldier and the Great War

Luton Culture and The University of Bedfordshire have put together this excellent resource on the history of WW1 as it affected Luton. We love the interactive pin-map which allows you to explore location-based stories, many submitted by members of the public. Like the IWM project, it puts human stories at its heart, and invites users to submit information they have found themselves – like this story of a search for love in wartime Luton.

This an excellent example of how digital allows co-operation between museums to create unique exhibitions. It is an online archive drawn from some of the leading European museums, as well as a collection of user-generated stories from members of the public across Europe – making it a fascinating way of seeing the conflict from the perspective of all the warring nations. From a postcard from Hitler complaining of toothache to archive footage of the Somme frontline to the family diary of a British soldier that stopped a bullet - the site is a treasure trove of images, video and stories that is simple to search to navigate.

This is a smaller project than the others listed, but shows how digital can be used just as effectively at a local level. The Trust has set up this online resource to help research and tell the stories of the men listed on the War Memorial and to uncover any names that have been left off and need to be added. Stories are researched by volunteers, or contributed by the public and the result is a fascinating insight into the lives – and deaths – behind the names that adorn the local war memorial.

These are just five of many examples – there are many other great digital museum projects around the First World War. If you know of any – or maybe you’re involved in one – please let us know and we’ll highlight some more examples in a future post. You can use the contact form to get in touch.